GitX-dev is a fork (variant) of GitX, a long-defunct GUI for the Git version-control system. It has been maintained and enhanced with productivity and friendliness oriented changes, with effort focused on making a first-class, maintainable tool for today’s active developers. 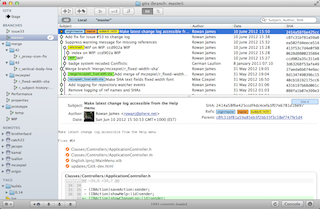 For the most up-to-date information, please see the change log for the latest build, or the live commit list.

Building on the solid foundation of GitX, GitX-dev provides:

GitX-dev is further specialized for software developers, and is used day-to-day in production environments. We consider it to be feature-complete for most git workflows, with only uncommon or potentially-destructive commands requiring git command-line interaction.

As a collaboration tool for a diverse team trying to make other things; we take feedback seriously from everyone involved in software production. We want to make good version control an invisible, second-nature step of everyone working on a product. Re-work sucks.

How is it better?

GitX-dev includes a selection of improvements from around the GitX fork community.

There are also a range of visible and under-the-hood changes to make GitX-dev a distinct improvement on other forks you may find.

Does this come at a cost?

Monetarily? No, GitX-dev will always be freely available. But with a limited number of contributors, and to properly support Mac and iOS devs using the latest-and-greatest (even beta) environments; there is an obvious need to reduce the support and maintenance load.

Where can I get it?

GitX-dev uses the Sparkle framework for in-app updates; so once you have version 0.11 or later, you can check for or update to new builds from the GitX menu at any time, or opt-in for automatic updates.

Developing for GitX-dev has a few requirements above and beyond those for mainline GitX.

Most third-party code is referenced with Git submodules, so read up on those if you’re not familiar.

GitX is licensed under the GPL version 2. For more information, see the attached COPYING file.

GitX itself is fairly simple. Most of its power is in the gitx binary, which you should install through the menu. the gitx binary supports most of git rev-list’s arguments. For example, you can run gitx --all to display all branches in the repository, orgitx -- Documentation to only show commits relating to the ‘Documentation’ subdirectory. With gitx -Shaha, gitx will only show commits that contain the word ‘haha’. Similarly, with gitx v0.2.1.., you will get a list of all commits since version 0.2.1.

Any help on GitX is welcome. GitX is programmed in Objective-C, but even if you are not a programmer you can do useful things. A short selection:

I haven’t had the ability to test on 10.6 since 2011; GitX support has been maintained until mid 2013 by virtue of timely bug reports and relatively simple fixes, but the aggregate support weight to continue targeting 10.6 now exceeds my threshold for how much I’m willing to jeopardize further feature and performance development.

If you’d like to see GitX continue to support OS X 10.6, you are most welcome to fork from the 10.6_snow_leopard branch I have published on GitHub as a starting point.

Regrettably, although I feel the pain of being stranded on an old version, I am not interested in continuing to support 10.6; I will outline the main reasons for this here.